Fourteen months ago, Baigalmaa Norjmaa from Ulaangom, in northwestern Mongolia, began a 12,000km journey with Bactrian camels from her country’s capital of Ulaanbaatar to London, England. So far, her three-year traverse of Eurasia has taken her across the Mongolian steppe and China’s Xinjiang province to eastern Kazakhstan. ExplorersWeb checked in with Norjmaa about her project, which she calls Steppes to the West.

-How did this journey begin?

-I worked in Mongolian tourism for 12 years. In my free time, I went mountaineering. I’ve climbed all the major peaks in Mongolia except one, as well as Elbrus and Kilimanjaro. Eight years ago, I first heard of Tim Cope, an Australian who was traveling on horseback from Mongolia to Hungary. I wanted to do something similar, but with camels, as Mongolians did during the Silk Road era.

I am the first Mongolian woman to travel over 3,000km with camels. When I finally reach London, it will be the longest camel journey in history, using a single caravan. In the past, pack animals were routinely swapped for fresh ones at fixed camps. Given the distance that I’ve covered so far, these camels have traveled farther than most.

The idea of Steppes to the West is to promote Mongolian culture worldwide, share knowledge with people whom I meet along my route and also to empower women.

Norjmaa with a Mongolian family outside their solar-powered yurt. Photo: Steppes to the West

-What do Mongolians think of your journey?

-I have become famous among Mongolians worldwide, because such an endeavour is seen as very difficult, especially for a woman. Since the start of my journey, there have been a lot of positive effects: Camels are now popular again with Mongolians, and people are more interested in outdoor recreation. Also, I hope I can inspire women in rural areas to embark on their own future projects.

Hilleberg tent and camels: A winter camp in Mongolia. Photo: Steppes to the West

-What has been the most challenging part of your route so far?

-In Mongolia, the biggest challenge was the cold. Seven of us started the journey, but the others all gave up due to the cold, and some personal reasons. After the first month, we were in the Gobi desert in mid-winter. Some nights, we slept in -58°C. When it’s this cold, it’s especially important to take care of the animals. We have to clear the ground of snow and ice, so the animals [can eat and] not freeze to death overnight. 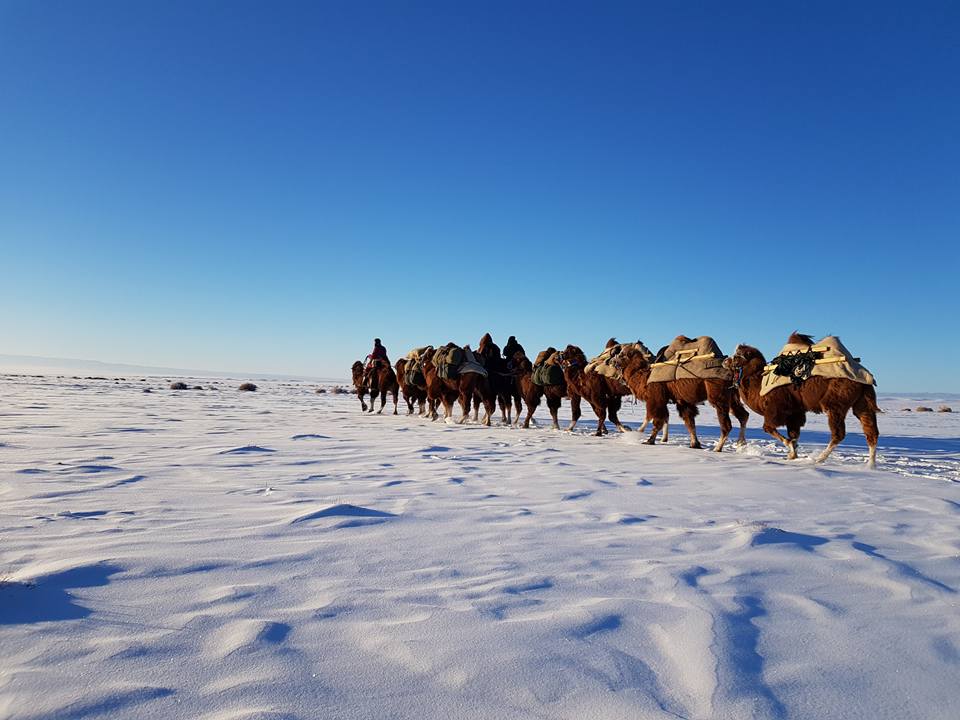 -You were born into a nomadic family and clearly have the know-how to do this trip. But what other skills have you picked up along the way?

-With all the different skills I learned as a kid, especially how to adapt to change, the journey has not been too difficult on me personally. With nine camels, there are bound to be issues, but if you remain flexible, everything becomes much easier. It’s also important to understand that you are only a speck in the universe and that you don’t know all the answers, so asking locals for advice is very important. You can learn a lot if you listen. 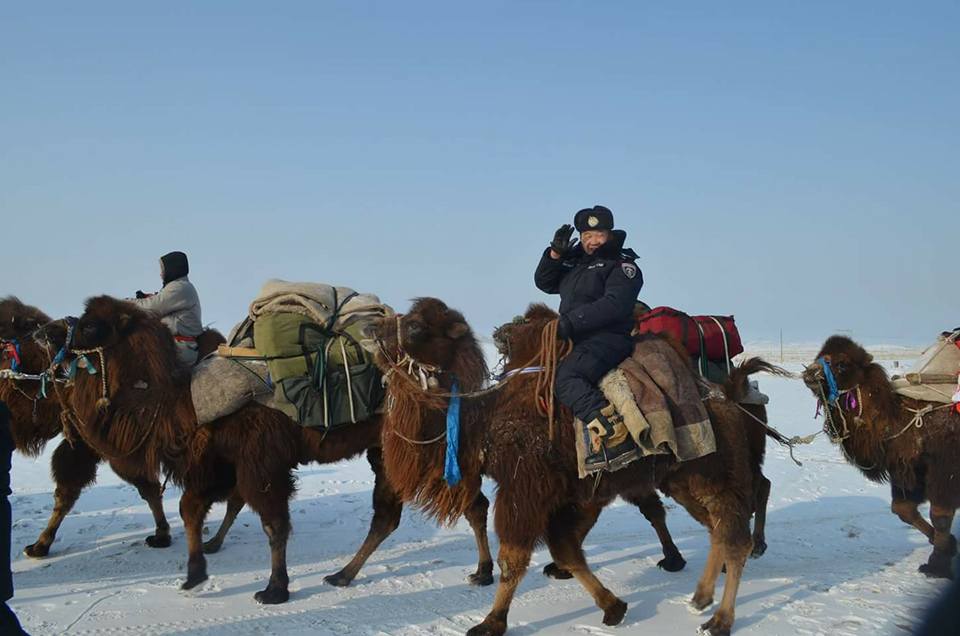 A Mongolian policeman camels up for a short jaunt. Photo: Steppes to the West

-Have you had any logistical problems taking your camels across international borders?

-At the moment, my camels are back in Mongolia while I await permits into Kazakhstan. Mongolia’s Ministry of Foreign Affairs is helping by dealing with all the countries, but this also means that there is a lot of bureaucracy, and I need to wait almost four months at each border. At the Chinese border, I waited five months for permits and now I’ve been waiting since November for permission to enter Kazakhstan from China. To make things easier for myself, I might end up buying new camels in Kazakhstan and donate my current ones to the army in charge of the Mongolia-China border. Hopefully, future permissions will be less time-consuming.

Until Turkey, we’ll have mainly deserts and steppe — terrain I’m familiar with — but Europe will be totally different. It’s unlikely that I will be able to camp there as freely as I have. 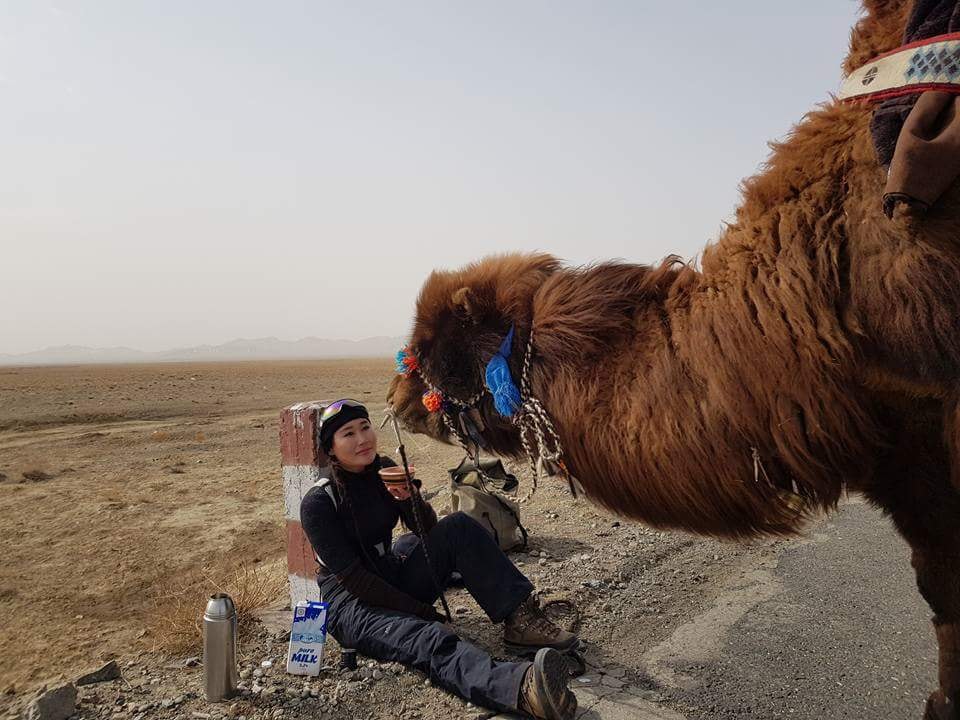 Norjmaa with one of her camels near the Kazakhstan-China border. Photo: Steppes to the West

-The notion of traveling with camels is quite romantic, but what it is really like dealing with them?

-A lot of people think traveling with animals is as easy as driving a car. In reality, it is much more time-consuming. You have to feed them three times a day and constantly pay attention to their well-being: Are they sick? Do they need water? Also, the pads of camels’ feet are really soft and expand as they walk. This means that they are not the best animals for paved roads, since their pads start cracking and bleeding, which is very painful for them. To prevent this, I have to massage them with different oils for days. I must tend to their needs first, even if I am exhausted. 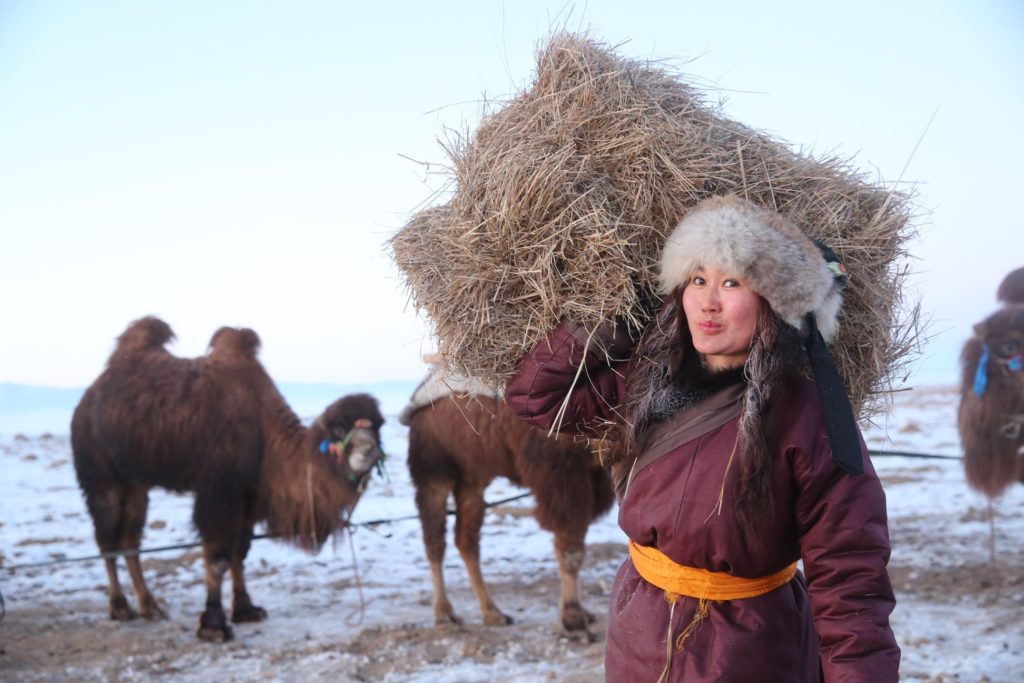 Norjmaa carrying hay for the camels. Their tough mouths can chew through thorny vegetation and even meat if plants are not available. Photo: Steppes to the West

-What are your plans for the next few months?

-Currently, I am at the Khorgos border crossing between China and Kazakhstan, waiting for permits. Afterward, I’ll venture into Uzbekistan and Turkmenistan. Even though dreaming big is good, I need to deal with one country at a time, so I don’t become overloaded. After the three ‘Stans, I’ll begin organizing my next phase into Eastern Europe.

Matt Traver is a filmmaker, photographer and creator of content relating to adventure, travel and culture